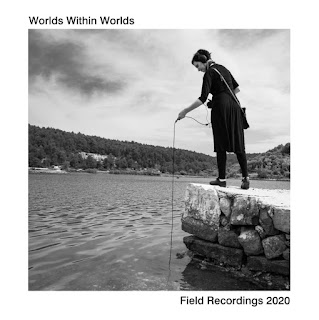 I was digging through some old mixes that had never been uploaded to Mixcloud and I came across a couple of old field recording mixes. The plan was to combine the two into a new mix. Well, as usual, the mix changed and I ended up creating a new field recording mix from scratch. Sort of.

I'm not going to provide a tracklist because most of the time there are 3 or 4 things playing at once and many times there aren't tracks associated with actual artists, some are just a bunch of sounds I found online. Or in one case, a file I found on my hard drive. I used a track that is called "rain thunder guitar loop." There is no artist associated with the file & I have no idea where it came from.

I'll point out a few specific artist tracks used in the mix(times are approximate):

There are lots of other artists appearing throughout the mix but those listed above are the most clearly discernible. Quick shout out to my neighborhood frogs which make an appearance from about 47:47 to 50:00. How do I distribute their royalties?

I hope you enjoy this sound excursion.

Email ThisBlogThis!Share to TwitterShare to FacebookShare to Pinterest
Posted by Low Light Mixes at 9:28 AM 1 comments 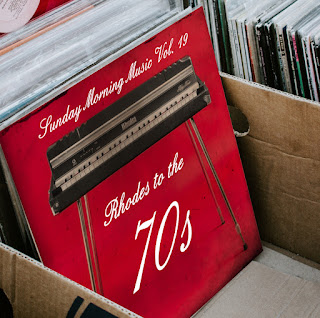 This mix started with an interesting album I came across this past weekend, Ernest Hood - Neighborhoods. It was originally released in 1975 but was recently rediscovered and rereleased. It's a curious combination of field recordings and early ambient noodling. The result is captivating.

I picked the track "Saturday Morning Doze" as the starting point for a new Sunday morning mix. I noticed it had Fender Rhodes piano type of sound going on. I'm not sure if there is a Fender Rhodes playing or not but it definitely reminded me of the Rhodes sound from the 70s that I love so much.

Longtime listeners will notice a few tunes that I've used before from Steve Hillage, Harold Budd, Brian Eno, and Daryl Hall(yes, that Daryl Hall). I generally try to stay away from using songs in multiple mixes but these cuts fit so perfectly that I couldn't resist. The other odd thing about this mix is the first 45 minutes are instrumental then we go to vocal tunes for the final 17 minutes. It wasn't planned, it just sort of worked out that way.

Enjoy this trip back to the 70s.


Email ThisBlogThis!Share to TwitterShare to FacebookShare to Pinterest
Posted by Low Light Mixes at 9:57 AM 2 comments 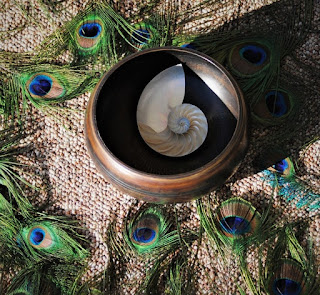 When Paul emailed a few weeks back with the idea of doing a bell themed mix I got all excited. I thought to myself - "Perfect, I have a whole folder of bell tunes I've been collecting." So I go to that folder and there are two tracks in it. That's it. I guess it's the thought that counts?

If Paul hadn't come up with this mix I probably never would have gotten around to it. Maybe there's some sort of lesson for the new year here - Finish what you start. Whatever the lesson, Paul's mix is a perfect way to start the new year and the decade. Here's what Paul has to say about it:

“There’s a certain irony in composing music meant to convey silence. Nevertheless, this seems to be a recurring theme among ambient artists, just as music in this genre is often fused with melancholy. Most of the time that resonates with me—as a very truthful feeling in our age of loneliness, upheaval and uncertainty. But this week I’m focusing on hopeful sounds, to ring in the new year with comfort and reflection.”

Email ThisBlogThis!Share to TwitterShare to FacebookShare to Pinterest
Posted by Low Light Mixes at 9:19 AM 1 comments

Best Albums(non-ambient) of the Decade 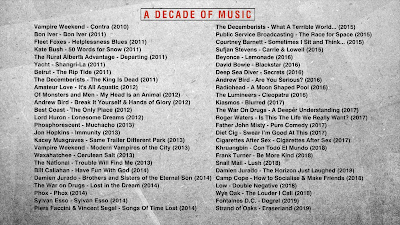 The lists just keep coming. I know this blog focuses on mixes of ambient & electronic music but we all listen to other stuff too, right?

It was around 2008 - 2010 that I started listening to more and more non-ambient music. I have listened to a lot of music, mostly indie/alternative, for my whole life. But during the 90s & 00s I listened to so much ambient, new age, electronic, instrumental music that I let the other stuff slide. It wasn't until my daughter was in high school and she introduced me to the Avett Bros that I started to balance out my listening habits.

So here it is, my top 50 albums of the decade, in chronological order:

Here's my list of the songs of the decade, in alphabetical order:


Here is the Spotify playlist for the songs of the decade:

What are some of your favorite non-ambient albums of the decade?

Email ThisBlogThis!Share to TwitterShare to FacebookShare to Pinterest
Posted by Low Light Mixes at 9:32 AM 0 comments