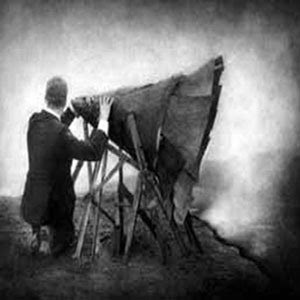 The idea for this mix came from frequent low light mixes downloader/listener, Ron Sylvester.  He sent me some mix cd's he had done, all of which are fantastic & intriguing.

One idea in particular interested me.  Ron downloaded some recordings of old 78rpm records from archive.org.  The thought of old, scratchy opera recordings was too much to resist.

So that's where this mix started.  I had intended it to be similar to my shortwave mixes but it didn't exactly end up that way.  Part of the reason is my own impatience, I wanted to get a new mix posted but didn't want to take weeks to sort through the tons of possibilities presented by archive.org & other sites.

So I collected some pieces, ripped off several other tracks from some of Ron's various mixtapes and grabbed some newly purchased & downloaded music and set off to mix it up.

I found that the perfect compliment to the old 78's is music from The Caretaker.  His music was inspired by the ballroom scene from "The Shining".  From the Caretaker website..."The first release played and extended this theme of altering 1920's and 1930's ballroom music creating an eerie and haunted soundworld. Subsequently the sound has become darker and often more abstract over time, moving away from the initial idea of a haunted ballroom into territories involving the mind and its abilities to recall memories."   You can download some of the full albums here...Caretaker Releases.  I have 3 Caretaker tracks in the mix, which is more of one artist than I usually put in one mix but I think these cuts work very well.

The mix sort of veers away from the old & scratchy theme about two-thirds of the way through.  It just sort of morphed on it's own as I pulled tracks.  Mixes can be funny that way, developing their own path.

I'd like to thank Ron for the ideas & for the tunes in his mixtapes that I ripped off for this mix.

T R A C K L I S T :
Email ThisBlogThis!Share to TwitterShare to FacebookShare to Pinterest
Posted by Low Light Mixes at 9:26 AM 12 comments