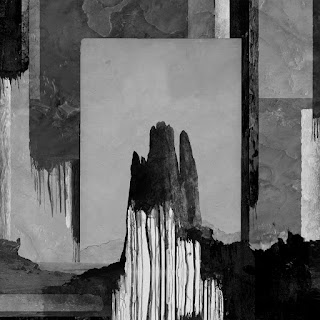 I can't tell you how excited I am for this mix. Well, actually I'm telling you right now so that first line was bullshit. Suffice it to say I love this mix. It comes from our good friends at Lost Tribe Sound, an amazing record label that is having a hell of a year. Of course, last year was pretty darn good as well.

Ryan Keane, the man behind Lost Tribe Sound, has put together a mix that is interesting and varied. It's cohesive without sounding all the same. This is a wonderful collection of tunes.

Here's what Ryan has to say about this mix:


Rarely do I get the chance to work on creating mixes of music, but I’m definitely more inspired to do so when I can ground the mix in a solid theme or concept.  When I was given the chance to create one for the highly-esteemed Low Light Mixes, I figured, it better be decent.

‘The Western Divide,’ my latest mix, is a grab bag of emotions, sort of manic, nostalgic, playful, with the ever-present tinge of dread and uncertainty that really mirrors how I’ve been feeling about life and society as a whole lately.  I partly wanted to see how bizarre the music I mixed together could get while still remaining palatable. Honing in on some pieces of music that come across as somewhat otherworldly spaghetti western sounding, I set about juxtaposing them with odd forms of jazz, electronic, hymn-like horn and organ pieces. It may have a bit of that Ennio Morricone score to some dystopian future General Hospital sort of vibe to it.

I’ve been infatuated as of late with unique uses of horns in experimental music, it seems that most of the time horns can easily be a pitfall in many styles of music. Either from overstaying their welcome, riding too long on what I like to call the “Dad Chords,” where it just gets cheesy, or simply becoming too noodly and irritating that the song would be better off without them. So hopefully I’ve combined some enjoyable uses of horns into the mix that avoid these situations, but who knows, I’m quite possibly out of touch.

In full disclosure, I run the label Lost Tribe Sound, so a few of the selections in the mix are from recent or upcoming albums on the label.  The opening piece is from a brilliant electro-acoustic Danish trio, Skyphone, which we’ve have the honor of putting out two albums for this August.  Kali Malone follows with her perfect use of a church organ as the ultimate drone machine. Next, a very odd find from a Spotify suggestion of all places, Jeremy Krinsley and Greg Heffernan’s only album together, ‘Material Culture 9.19.15’ is some left-field electronica, filled with loads of charming moments.

Next, Hampshire & Foat kick in, their ‘Saint Lawrence’ album from this year is an instrumental masterpiece for those into dim-lit jazz fueled folk. Sailcloth up next, also blew my mind, primarily an experimental upright bassist, the featured selection works more off of a droning horn and subdued bass notes than some of the other more pronounced tunes on the EP, ‘Close Keeping.’  Then, Danny Scott Lane who’s recent album on Shimmering Moods is about as perfectly refined an example as one could hope for from an experimental drone/classical album. Hoera is a mixed bag of tricks as well, bizarre combos of electronics, jazz, ambient and folk somehow fold into a very satisfying whole, definitely recommend all three of their albums. Drombeg, another tasty discovery, thanks to the Thesis label, an intense focus of melody and progression make this breed of classical well worth checking out.

Working in his way slowly into the tail end of Drombeg is a new piece from Ben McElroy, a highly emotive and creative songwriter, his whole catalog is sublime.  Mute Forest, a long-time favorite, lent me an exclusive song from his upcoming album for this mix, introducing “The Riven Sun.”  Followed that with a rising master of primitive guitar experimentalism, Seabuckthorn, from his new album, “It Can Ashen” is a droning genius.  Next up, Spheruleus with his title track from his brand new and highly engaging electro-acoustic album for my label Lost Tribe Sound. Zakè follows with some seriously delicious droning classical string and tape experiments from this year courtesy of Past Inside The Present. Kinbrae’s album, ‘Landforms’ from earlier this year totally destroys me, and is a great example of how to use those horns properly.  After that, Federico Mosconi delivers beautiful finger-picked guitar, bathed in the most melancholic waves of static and synths one could ask for!

MALK comes next with ‘Re-treat’ and delivers one of the most offbeat, original albums Lost Tribe Sound has ever produced, just give in to it. The penultimate piece comes from Offthesky, who’s had a hugely impressive year with two new albums that I’d consider among the best of the year. “Future Fire” provides another gorgeous example of how horns can work so beautifully in ambient music.  Finally, the mix closes with one of my favorite artists of all time, Geir Sundstøl. Geir’s newest genre-bending album on Hubro, is beyond genius.  I’ve got give a special thanks to Hubro, who’ve finally uploaded their entire catalog to Bandcamp, making it far easier to enjoy, definitely go explore the music they put out.

Hope you enjoy these tunes. Thanks for listening and having a read. 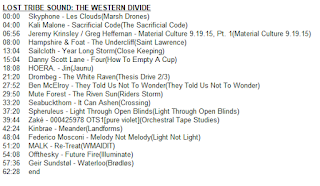 Email ThisBlogThis!Share to TwitterShare to FacebookShare to Pinterest
Posted by Low Light Mixes at 9:21 AM 1 comments

Eight Days in July - The Journey of Apollo 11 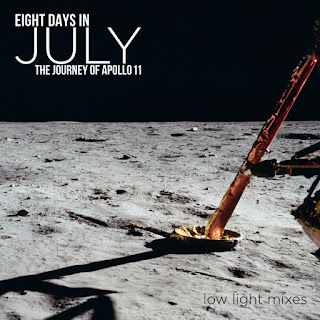 Anyone who has followed this mix blog regularly knows that I'm a space dork. I've done countless stargazing mixes, sci-fi mixes, NASA mission mixes, etc. So it should come as no surprise that I would make a mix to commemorate the 50th anniversary of the Apollo 11 mission.

This was a lot of fun to put together because, in addition to some excellent music, I listened to a bunch of mission audio from NASA. Thank goodness for youtube.

The mix tracks the journey as it moves from liftoff to orbit to TLI(translunar injection) to landing and walking on the moon and finally returning home. The titles of the tracks in the mix give a clue as to what is happening at that point in the expedition. Such as Max Richter's "The Escape" as Apollo performs the TLI burn to leave earth orbit and head to the moon. Or the Jane Antonia Cornish tune, "Into Silence," which is heard as the crew goes around the backside of the moon and loses radio contact.

There are three cuts from Justin Hurwitz's wonderful soundtrack to film First Man. One oddball track is "Lunar Rhapsody" from the album "Music Out Of The Moon" released in 1947. It's in there because Neil Armstrong had it on cassette and listened to it during the trip.

In addition to the music, there is a lot of audio from the mission in this mix but I love it because as I said I'm a space dork. I think it works well with the tunes.

If anyone else is even a bit off a space dork, you may like this trove of NASA pics...

There are a ton of great pics in large format.

I hope everyone enjoys listening to this mix as much as I did making it.

Email ThisBlogThis!Share to TwitterShare to FacebookShare to Pinterest
Posted by Low Light Mixes at 10:30 AM 3 comments 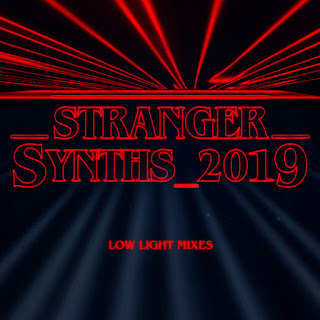 In honor of the third season of Stranger Things dropping today, Low Light Mixes presents Stranger Synths 2019. This a retro synth mix that falls right in line with the synth sounds of Netflix's Stranger Things series.

Email ThisBlogThis!Share to TwitterShare to FacebookShare to Pinterest
Posted by Low Light Mixes at 8:04 AM 1 comments