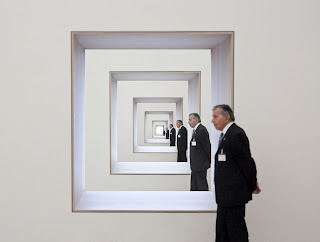 UPDATE: The first "Multiples" file abruptly ended at 57 minutes for some unkown reason. But it has been fixed & the full mix is now online.

I am a chronic procrastinator. Paperwork piles up on my desk until I am forced to deal with it because I can't see the actual desktop anymore. There are to do lists scribbled on scraps of paper all over the house, most of the lists unfinished.

With that in mind I present this latest mix which began more than a year and a half ago. Mick from the music blog, Subversion, had an idea for doing a cooperative mix. The plan was for each of us to do a section of the mix, each one getting longer by multiples of 9. So first two sections are each 9 minutes, next two are 18 minutes each, then 27min(although in the final version section 5 was less than 27).

Mick was good at holding up his end of the donkey but I would just putz & putz between sections. We had some weird pitch problem with a section & the whole mix sat dormant for some time. Then Mick sent me a revised mix with a new section 5 and we decided to just leave it there so it could get posted. If I had to do another section or two it may never be released.

It's kind of interesting hearing the mix after so long because it uses cuts I haven't listened to much since doing that section of the mix. That's a problem with so much good music that is constantly being released, I focus on new music & too quickly forget about music that is barley months old.

I'm glad that this mix will finally make it out into the world.

While you're out in the world looking for some of this music, head over to Entropy Records. The Buddha Machine Music cut used in section 5 is available there.

Email ThisBlogThis!Share to TwitterShare to FacebookShare to Pinterest
Posted by Low Light Mixes at 10:31 AM 4 comments