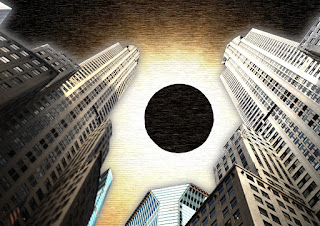 I guess you could call this mix "Televison Sky #2".  It's a continuation of the sounds found in that mix.

This has more beats than a normal low light mix, more of an electronica sound.  I think it has a nice mix of old & new material.  The oldest cuts are from Can, Eno & Earthstar, 1973, 1975 & 1981 respectively.  In the middle we have the Casino Versus Japan cut from 1999 & the Aspen track from 2000.  Then there are a few newer tunes like the ones from Tobacco & Maps & Diagrams.

I was happy to sneak in part of a long track from B. Fleischmann called "Take Your Time".  I listened to it recently for the first time in a long while & remembered how much I like it & knew that I had to squeeze it in somewhere.

I was also happy to have done the accompanying pic myself.  It's from a picture I took in New York & then messed with in my video editing software, rather than photoshop, because I don't how to use photoshop. :(   It's nothing great but it was fun to come up with something sort of original.

Future days by Lowlight on Mixcloud

Email ThisBlogThis!Share to TwitterShare to FacebookShare to Pinterest
Posted by Low Light Mixes at 2:14 PM 3 comments