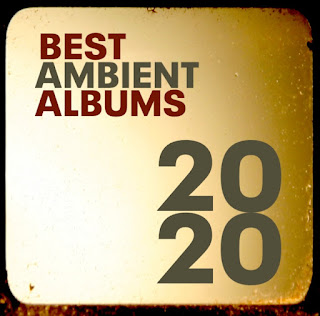 I always label these lists and mixes as "Best Ambient," but with so much music released each year, coming up with a true best list is almost impossible. So this is really more of a list and mix of my favorite ambient albums of the year. Best of 2020 just sounds better.

I don't about you but I bought a lot of ambient music this year thanks to Bandcamp Fridays. Through regular purchases and special deals, where one could get a whole discography for like $10, I think I bought about 250 ambient albums this year. Yikes! Then add in releases that labels and artists send my way and it amounts to one hell of a lot of music.

Thanks goodness for all that music though. I've been stuck working from home for almost 10 months and would have lost my mind without music to get me through it. One of the treats that got me through the year was Whitelabrecs excellent Home Diaries series. It featured music recorded and released during quarantine. I couldn't pick just one release so I cheated and put the whole series in my top 15 list.

It's hard to narrow down that much music into 30 or 40 favorites. I know I will miss things. But this list has a bunch of styles so it gives a nice representation of what I listened to this year. My favorite album this year was actually an easy choice, it's Mindful Movement by Clariloops.

Clariloops is Australian clarinetist, Ruby Lulham. She experiments with looping and pedals to to produce beautiful music that takes my breathe away every time I hear it. The folks at The Slow Music Movement put it best when they said, "producing music with a purity & simplicity that is both charming & striking." Please go check it out.

1 Mindful Movements - not really an ambient track per se - classical impressionism was long dead before 2020
2 Abiungo - not sure why this made the cut, the ending section is nice, but I just think you liked the titling
3 Chi Factory - good 👍
4 Lattimore - very good 👍👍
5 Mute Forest - ok
6 Ecovillage - ehh - is it really the best?
7 Heath - 👍 was interesting with the location recording but I never realized clarinets are so in this year
8 MC Tech - good ambient 👍
9 T & T - ditto
10 Tasselmyer - progressed from so-so to very good as the title may imply 👍
11 Zake - lended good mix continuity where you positioned it, but I think it overstayed its welcome
12 Night Sea - good, kept on evolving 👍 I think this trace should have concluded the mix
13 Caminiti - was this roman radio static? 👎
14 Sibling & Hvnchrd - whew, definitely a science project, but ok
15 Noto - Real nice, too short! 👍👍
16 Echoflex - Worthy to make the cut 👍
17 Bissonnette - I like that you gave him a long long fade-in, good transition, but that track doesn't real hold my interest
18 Karsenti - Good thinking person's ambient, intense
19 Lane - No way, scrapping nails on a blackboard 👎👎
20 Mt Shrine - A pleasant soundscape, but overstays its welcome
21 Flexagon - 👍👍 Its like relaxing with a car alarm going off. I enjoyed the lovely ambiance.
22 Jogging House - Poor folks got the alarm too. Sounds like electronic maracas. Just ehhh, nothing to write home about.
23 Halftribe - Interesting colors, but I am personally getting tired of lamenting cellos and with string quartets.
24 Fritch - Wow, a real life composer for crying out loud. Too bad we can hear his piano pedaling all too clearly. Kind of leaves us hanging at the end, I guess that what you wanted to depict for the end of 2020!

Duck - Thanks for the link to your mix! I'm listening now & it's excellent! I'll have to make a few more purchases before the end of the year based on the mix. Starting with Sonmi451. I didn't know he had released that. I generally automatically buy every Sonmi451 release. Thnaks for listening & commenting. Cheers!