I fell asleep at my desk while making this mix 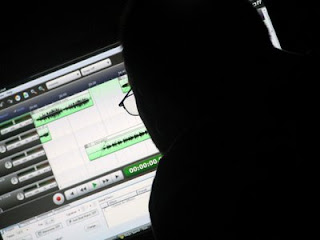 I listen to ambient music every night when I go to bed. I usually browse my recent acquisitions to find something for sleep music. There are a few recordings which get used more than others.
Two recent releases by Steve Roach get regular airtime here at Low Light Mixes. Last year's "A Deeper Silence" and this year's "Dynamic Stillness".
There was a time when I played Deeper Silence in the background all around the house everyday for a week. It created this strange feeling like I was on a spaceship. Mostly this 73 minute-long tune gets used for sleep music. The same goes for "Slowly Revealed" off of "Dynamic Stillness". I have fallen asleep to this track many times.
Another nighttime favorite...the "Beautiful Land of Nod" mixes from Mr. Asphalt Eden(aka - Brian Bieniowski). I played these two mixes quite a bit when I first downloaded them & still return to them often. I remember Brian saying he liked sleep music that seemed to rise & fall like breathing. It was that idea that inspired a mix that I did called "breathing music". I use this mix fairly often for drifting off to sleep.
This brings us to the new mix. I wanted to do a new sleep mix so I could incorporate the Steve Roach cuts. So I dumped some tracks to a portable hard drive, brought it to work & starting mixing in between "real work". I had 4 or 5 tracks laid down & I was listening to one of the transitions & literally fell asleep at my desk, hence the title of the mix. A lot of the tracks sound very much like each other which I guess is good in this case because one track stretches into another, in a long, trance inducing, ambient lullaby. At 90 minutes, the mix is longer than most, but I thought the length worked a bit better for sleeping.

I just wanted to say thanks for your fine series of mixes, I also listen to ambient music to get relaxed and drift off to sleep and many of yours are perfect for this (although I do enjoy them awake too!)

A great series of mixes! :)

thankyou for sharing your mixes, I listen to them often. Maybe I'll give it a try myself one day.

Could I ask which software you use please for putting together your mixes ? Many thanks.

I use Acoustica Mixcraft at home & Avid Newscutter at work, which will soon change to Final Cut Pro.

Acoustica makes a couple very nice easy to use mixers. You can find one here... http://www.acoustica.com/mp3-audio-mixer/

Thanks for the reply Dave - I've been using Mixmeister for the last couple of years - didn't really know what else is out which is similar. Thanks again.

This is a fantastic mix. I use it at school: really mellows out my students.

Your mix series is excellent. And I find myself especially enjoying this one mix in particular over and over again. I'm impressed.

Thank you and please keep up the great show.

Hi Dave! Thank You for beautiful mixes. They envelope and immerse me in fantastic trip.
May I ask You for sharing "Beautiful Land of Nod" cause I can't find It anywhere. You have advertised it very attractive :-)

I enjoyed reading this article. PLease continue publishing helpful topics like this. Regards, from https://beddingstock.com/