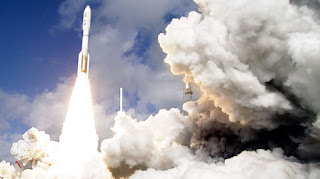 This past Saturday NASA launched the Mars Science Laboratory known as "Curiosity" on a 9 month journey to the planet Mars.  As I was watching video of the launch, I was thinking about music that would work well with a launch & space voyage.  I quickly collected some appropriate tune & cranked out this mix at escape velocity speed.

The tracks are all electronic/electronica cuts that I thought seem to fit the theme.  As it turns out, many of the tunes have titles that are perfect for a mix like this.  Titles such as "Towards Unknown Space", "Solar Sailer", "Born to Fire", "Your Wings Make You Fly" and of course "Phobos & Deimos Go To Mars".

That "Phobos & Deimos" tracks was one of my absolute favorite tracks in college.  I had a clear vinyl version of the Synergy album "Cords".  There aren't going to be too many times that I can sneak that cut into a mix so I'm glad I got that one in here.

The NASA audio is all from the actual launch of the Curiosity Mars rover mission.

In the coming months maybe I'll do "Flight of Curiosity" & "Curiosity Lands" mixes.

Launch of Curiosity by Lowlight on Mixcloud

Email ThisBlogThis!Share to TwitterShare to FacebookShare to Pinterest
Posted by Low Light Mixes at 6:55 PM

Space Walk by Lemon Jelly would've gone good here. Thanks for the mix!

Hello, I just stumbled across your blog and you have some great mixes on here, also a lovely taste in music.
I recently recorded a very chilled out mix if you want to check it out.
http://soundcloud.com/dj-newby/dj-newby-all-things-ambient

Dynamite start to this, but get kind of silly after Synergy. Suggest substituting the 8 bit and Balam Acab with Space Walk as suggested by Tonepoet, or even a cut from the Interstellar Suite.