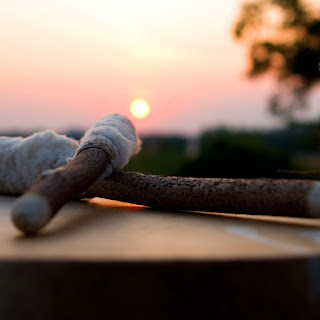 Who remembers what a big thing tribal ambient was for awhile back in the 90s?  The first time I heard "Fearless" from the album Strata by Steve Roach & Robert Rich I was hooked.  There were many Roach albums from that time period that drew on the tribal ambient sound - World's Edge, On This Planet, Soma, Australia: Sound of the Earth, Forgotten Gods, Cavern of Sirens, Earth Island, Well of Souls, The Serpent's Lair,   - oh heck there's too many to keep track of!

I loved that sound.  But as so often happens I grew tired of it.  Part of that was just me overdosing on that style and part of it was as the style proliferated we ended up with crappy new age versions of tribal ambient.  So I stayed away for a long time while still revisiting the classic Roach recordings occasionally.

Earlier this year I discovered the music of Al Gromer Khan, thanks to Paul Asbury Seaman.  I was listening to a few cuts from Lexus and I enjoyed the tribal sound and realized that I hadn't listened that style very much lately.  But those tracks got me going and the next thing you know, I'm collecting tacks for a mix.

The tracks in this mix are a good sampling of new cuts, older cuts from the tribal heyday and a few really old cuts from the early 80s.  The tracks are also a mix instrumentation from drum sounds to gamelan to marimba.  I love how this turned out and hope you do too.


Email ThisBlogThis!Share to TwitterShare to FacebookShare to Pinterest
Posted by Low Light Mixes at 8:43 AM

You have also demonstrated this genre is evolving and not quite dead yet. Perhaps its hasn't died because this medium is one of the only forms of music to depict prehistory in a convincing fashion.

Thanks for the info on the 80s tribal music. I was unfamiliar with Garry Hughes & Rudiger Lorenz. I'll definitely check them out. Cheers!