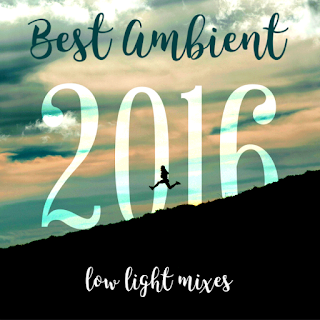 Every year I make two lists of my favorites albums of the year.  One list is generally indie music and the other is ambient/instrumental.  Even though I have a difficult time deciding on the final group it is easier coming up with the indie list than it is for ambient.  Maybe it's because after a year of music they all tend to blur together and sound the same.  There are definitely some stand outs, like the two releases from Johann Johannsson this year.  But generally it's tough to make a list because there are a lot of quality recordings every year.

As hard as it is, it's still a lot of fun digging through a ton of releases to find my favorites and then out them together in a coherent mix.  The tracks don't appear in any particular order.  I just figured out what cuts sounded good together.  Not all the tracks from my best of list made into the mix because that's just the way mixes go sometimes.

Here's the list, I'd love to hear about your favorite albums of the year, tell me about them in the comments.

Email ThisBlogThis!Share to TwitterShare to FacebookShare to Pinterest
Posted by Low Light Mixes at 7:24 PM

Looks like a good mix Dave, friend. As for my favourite ambient albums of 2016, I don't have many, actually, except my FL ones. It's mainly my own stuff, and ASC - No Stars Without Darkness. I like stuff from 36, The Infinity Room is nice. Suzanne Ciani's collaboration with Kaitlyn is likely the best collaboration I heard all year recording wise. And as ever, Steve Roach is putting out great drone on eMusic.

Also a fan of Delia Derbyshire - Electronic CD from earlier this year, released through boomkat. An outlier on library music fringes. Haunting sounds, very Leyland Kirby. The "Sadly" CD housing was so morbid I had to bin it, however in the end.

I never got much chance to really listen to the latest Tim Hecker opus.

Looking forward to Eluvium's new output, the 7LP box and GAS (Wolfgang Voigt) 10 LP 4 CD box were highlights, but I do not have the bank balance to spend that amount on vinyl records. The Harry Bertoia from Christmas 2015 was a special 9CD box set gift of hauntological ambient and spectrally DARK tones. Mad decent, noir sounds.

This year I have been appreciating the jaunty piano music of Jandek - "Song Of Morgan" 9CD box on Corwood Industries which came out in about 2013. Wire interviewed fellow recluse.

I reviewed that for Fluid Radio. I keep reviewing with James Catchpole and Daniel Crossley. Hotel Neon had a heartwarming release, and Wild Anima on Blue Tapes released Grouper alike sounds of charm and wonder.

In terms of Grouper-y drone, my favourite album of 2016 was Drawing Virtual Gardens - Heartbeats Of A Premature Image.

Mick, Thanks for the heads up on all this music. Some I knew of, like the Koner recording, but had forgotten about. But many others I am totally unfamiliar with and am looking forward to delving into.

Thanks also for your support over the years. I can't believe I've been doing these mixes for 10 years.